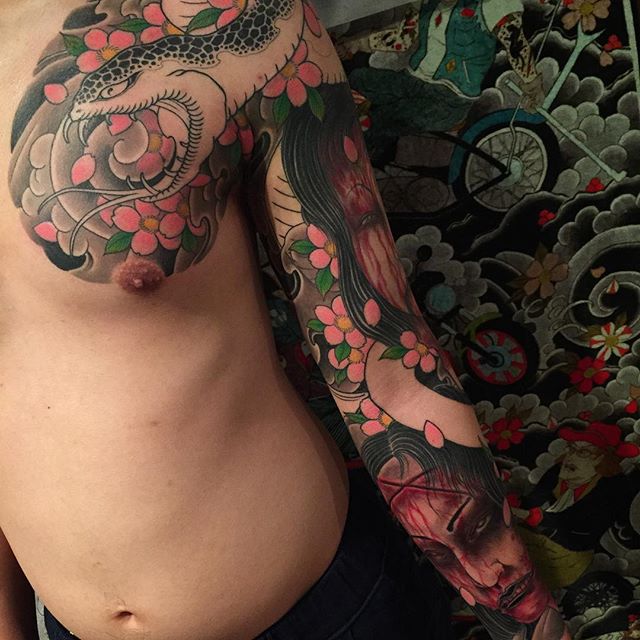 My name is Horisen i do  tattoos in  Seoul south Korea.

What can you tell us about yourself and your artwork?

I have involved in doing tattoo for ten years. I liked drawing when I was young. When I started tattooing, I was impressed by the drawings and works of Horiyosi III , I pursued his works.

What kind of tattoos you like to do the most ? And why?

I pursue the Irezumi genre.

At first I liked old Irezumi. But as time passed, I wanted to have the themes with a modern feeling while maintaining the designs of the traditional Irezumi frame.

I liked the power which I can feel from Irezumi so much that I fell in love with this genre.

What kind of subject of Irezumi tattoos  you like to talk about? And why?

The theme of Irezumi which I like the most is snake and namakubi.

I liked the dreamy  feeling from a snake and the power of the tail. It was a good theme and went well with surrounding themes. So I like it.

The blood and the cut neck of Namakubi picture are striking  and powerful. So I try to use it frequently. I am trying to interpret the feeling in a tattoo.

That’s a powerful theme! Can you tell a bit more about this topic?

Namakubi or severed heads are classic japanese tattoo designs.
Namakubi means a head that has just been cut in Japanese.
In the old days, when a war broke out, he who cut of the enemy’s head was awarded a prize.
In that sense, Namakubi means to bring wealth.

The sword drawn with Namakubi symbolizes masculinity, ability, and power.
The breaking of life with the knife means that something is completely accomplished.

The snake (hebi) believe to bring protection against illnesses, misfortunes and disasters The snake (hebi) means eternal life, immortality.
It means that the snakes will be reborn from death  and as they grow up  take off their faults.
Although a snake has a bad image in the West, in the East when a snake (hebi) comes out of a dream/vision it is treated as a good omen, a dream related to wealth and fortune.
This one is eternal!

Horisen is a tattoo artist from South Korea. Horisen works internationally and you can find him working on conventions around the world and on tour. He is a close friend of us and visits our shop regularly.
He’s a true master of his trade and from personal experience I can tell you, it’s a joy getting tattooed by Horisen !